Shopping Cart
Your Cart is Empty
Quantity:
Subtotal
Taxes
Shipping
Total
There was an error with PayPalClick here to try again

Thank you for your business!You should be receiving an order confirmation from Paypal shortly.Exit Shopping Cart

Johnny Beattie, who has died aged 93, was one of Scotland’s most popular and versatile entertainers. He was a true gentleman and in a career spanning sixty-three years, he worked as a comedian, singer, television games show host, after-dinner speaker, master of ceremonies and as an actor on stage, screen and television: quite an accomplishment for someone who left school aged sixteen to begin work as an apprentice electrician at Fairfield’s shipyard in his native Govan.

He often claimed that he picked up his awareness of humour in the shipyards, adding that in those days, shipyards, with all the patter, were comedy workshops.

That ‘patter’ was subconsciously absorbed by the young apprentice, because people who knew him at that time called him a patter merchant. Johnny always said it was ‘the patter’ which attracted him to stage work in the first place, although in his initial stage appearance, he played a policeman in an amateur dramatics production called Grand National Night and it was a straight part in which he had to follow the script.

As a teenager, Johnny spent many evenings in Glasgow’s University Cafe where he’d eavesdrop on the conversations of a group from an amateur dramatic society who frequented the cafe following their rehearsals. He was surprised when one evening, the society’s director approached him saying they were looking for someone tall to play the role of a policeman and wondered if he would be interested. When recalling the incident, Johnny said that having been ‘eyeing up the talent’, he decided to take up the offer and in his words “That was the start of it”.

Of the talent, he was particularly interested in one - a fashion model named Kitty Lamont - and they began going out together and in 1950 they became engaged. At this time, he was working in the shipyards whilst rehearsing and appearing in ‘am-dram’ productions where he quickly rose to playing major parts.

He also became friendly with a fellow named Walter Butler and they’d appear together in concerts, mostly in Partick Cross Subway Halls. Scottish tenor Robert Wilson was in the audience during one of the shows and he went backstage afterwards and asked Johnny if he’d like to appear as a solo act in a show he was planning in Broxburn. Johnny agreed and, following his appearance at the concert, Robert Wilson offered him six months in a touring show, which thrilled Johnny but also left him in a dilemma - for two reasons. Firstly, he was about to be married, and secondly, his mother was not keen on him giving up his job as a time-served electrical engineer.

However, he decided to give Robert Wilson’s offer a try and told the singer he’d be delighted to join his show but explained that he wouldn’t be able to appear at the opening as he would be getting married at that time. Fortunately, the tenor said he’d be pleased to take him on after the wedding. Johnny recalled “Kitty and I returned from our honeymoon on a Saturday and I commenced work with Robert Wilson on Monday at Aberdeen’s Tivoli theatre. That was in 1952 and I did a six minute spot comprising a song and some gags, and thereafter we toured theatres and venues in central Scotland for the remainder of the show’s run. Following that, I toured the north of Scotland and Northern Ireland and was surprised and delighted when Eric Popplewell, the owner of Ayr’s Gaiety Theatre, came to one of the shows and invited me to join his winter pantomime - Cinderella - and that was my first of many contracts I had at The Gaiety”. A few years later, Johnny Beattie was top of the bill in their summer show - The Gaiety Whirl.

“Jack Milroy had completed numerous Whirls before I was there in 1959” he recalls “and Jack was so popular that he was a hard act to follow”. But despite Johnny’s anxiety the Gaiety audiences took to the Govan comedian and he went on to play so many shows there that he was reckoned to be the artiste with most appearances at that venue.

In the role of comedian, Johnny was happy performing with others. His range of ‘comedy feeds’ included Anne Fields, Hector Nicol, Johnny Mulvaney and Russel Lane. He always teamed up with people he liked and who were similarly comfortable working with him on stage. This was based on his view that when spending long seasons away from your family, it’s important that everyone gets on together, and with Johnny, they did. He would relax by playing golf with other members of the cast - most often with Hector Nicol and Tom and Jack - The Alexander Brothers. None of the people he played with were serious golfers, which prompted him to form their own golf society and he suggested a name which reflected the team’s ability. It was called HUGS - Heids Up Golf Society - and he wrote the constitution which basically stated that if you took the game too seriously, you’d be suspended. He also had special neckties manufactured with an emblem depicting crossed golf clubs and the lettering HUGS.

Of the many theatres he worked in, Johnny was fond of playing Rothesay’s Winter Gardens, but latterly commented that his favourite theatre was the Gaiety, which says a lot for an act who has played theatres all over Scotland and in many countries of the world including Canada, the USA and the Far East. He’d performed at many functions for the St Andrews Society in Singapore and was no stranger to that part of the world. He’d been there in 1945 as a member of the Royal Marines where their task was to assist Japanese soldiers in moving equipment within Malaysia, whilst simultaneously standing guard over them. During his time there, a black and white photograph was taken in which Johnny was one of seven young marines in tropical uniform standing under a tree.

River City was the last of many television shows he appeared in. He began in 1964 on BBC’s Johnny Beattie’s Saturday Night Show which ran for six years before he hosted STV’s game show Now You See It. Thereafter he made numerous TV appearances on shows including Welcome to the Ceilidh, Scotch and Wry, Rab C. Nesbitt and Taggart. In addition, he was a DJ with BBC and Radio Clyde and was also a recording artiste and one of his recordings made it into Scotland’s Top Ten - The Glasgow Rap - which was written by Ronnie Christie, a singer who regularly appeared on stage with Johnny.

Johnny had a happy, eventful life with all his showbiz activities at home and abroad. He was passionately involved with his two sons Paul and Mark, and his two daughters Maureen and Louise. Kitty died in 1990. He also gave time to charitable causes and raised thousands of pounds for charities; the most notable of these were St Margaret of Scotland Hospice in Clydebank, the Scottish Showbusiness Benevolent Fund and Friends of Winter Gardens in Rothesay. Until the time of his death, Johnny was President of the Scottish Music Hall Society - a role he held for many years.

His involvement in these roles did not go unnoticed and in 1993 he was given the Lord Provost’s Performing Arts Award and in 2007 he was awarded an MBE for services to charity and to the theatre. At Glasgow’s City Chambers in 2012, Johnny was presented with the Loving Cup, as part of the Lord Provost’s Awards.

At 93 years old his health was gradually fading and he was admitted to the St Margaret’s Hospice in Clydebank where he died on Thursday 9th July 2020. 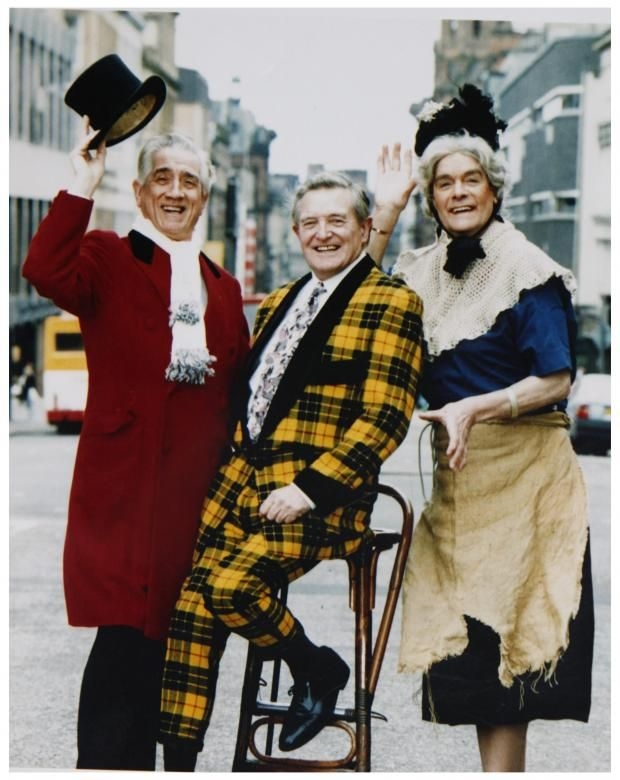 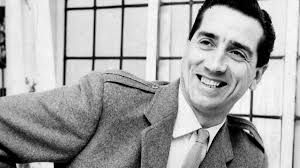 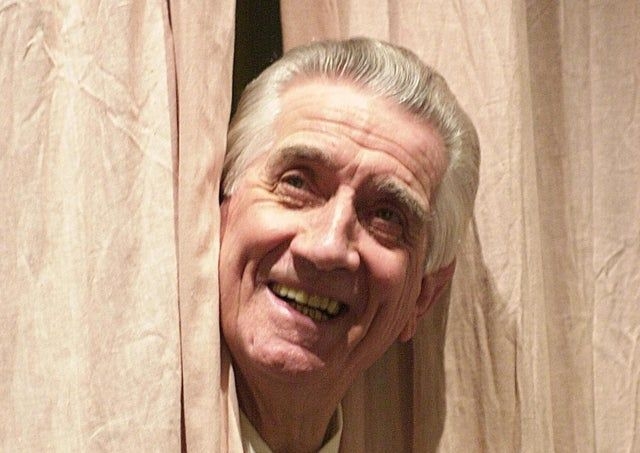 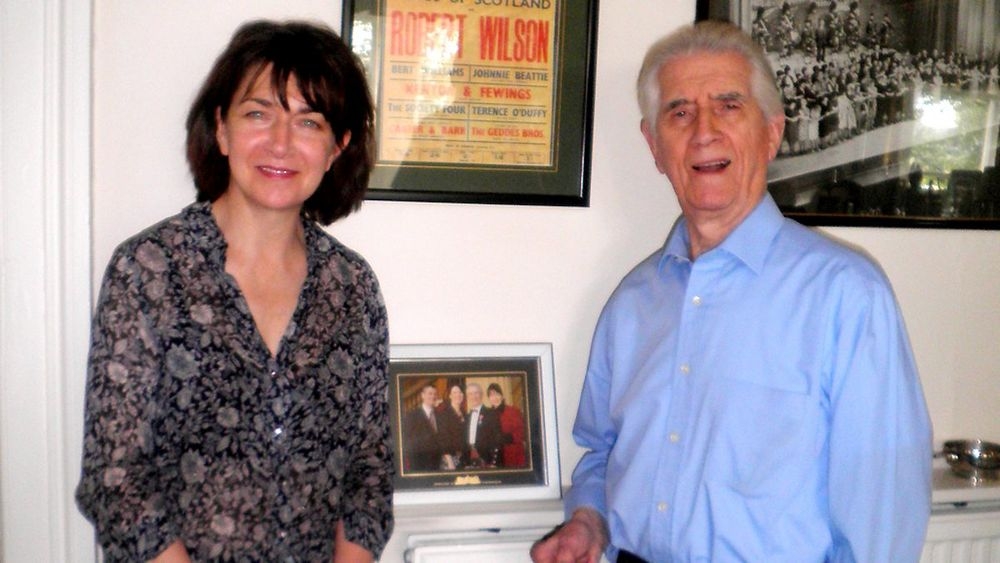 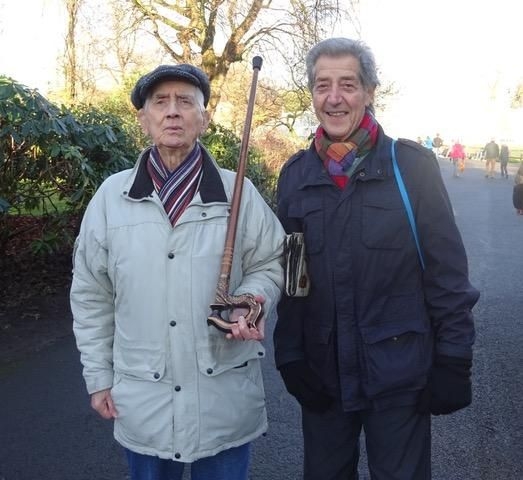